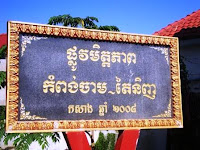 ks of the great Mekong river at the southern end of the impressive new Japanese-funded Kizuma bridge, the quiet town of Kampong Cham, 3 hours north of Phnom Penh, will be my base for the next 8 weeks.

My task here is to learn to speak Khmer (or actually K’mai). I will need this to be able to communicate once I start work in December, as few if any people will speak English (or French for that matter) where I’m going.

This is mainly as I’ll be at a hospital in the remote Banchay Meachay province of NW Cambodia, which by all accounts will not be a hotbed of educated English speakers (though rumour has it there may be some French-educated doctors if I get really stuck). The lack of even French speakers is also of course a legacy of the brutal Khmer Rouge era, when such ‘intellectuals’ were prime targets to be killed.

After a week of lessons I confess I’m finding it hard work. I haven’t studied this intensively for years - and the heat here really isn’t conducive to studying the finer points of adjectival verbs.

Not that I can complain: our teacher Dara is inspirational, not only through his energetic teaching, but even more as someone who survived the killing fields and learned English during 10 years in a Thai refugee camp. Given his history, his patience and constant good humour is impressive, not to mention humbling.

K’mai is not exactly easy for us barraing (westerners). For a start it has 33 consonants and no fewer than 23 vowels – a few more than ‘a e i o u’! Thankfully we’re not even attempting to learn the written language, which uses a huge and baffling alphabet of hieroglyphics.

It’s also difficult just because there is seldom any reference point for learning words – they just don’t sound like anything else, so are difficult to remember. So you have to be inventive: a rabbit-thief eating by the water in the Lake district gives me ‘po-cha-ni-yah-taan’ (poacher near tarn) so I can try to remember the word for ‘restaurant’. I may not be eating out too often.

On the other hand there are many up-sides – no tenses, no plurals, no genders and no tonality (by which I understand that a word doesn’t magically change meaning if your voice goes up at the end or something – linguists can correct me on that one).

And there are also some lovely words in K’mai. I find a beautiful simplicity in the verb to like (cho-chet – ‘to enter the heart’) and in bed-, bath- and dining-rooms (‘sleep-‘, water-‘ and ‘eat-rice’-rooms). Not to mention lashings of bongs, dongs and pongs to keep me amused.

The most useful phrase of all, I hope, will be ‘no problem’: ot pan-ya-haa!


Whenever I mention C 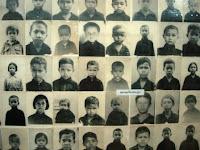 ambodia to anyone their immediate reference point is the killing fields and the Khmer Rouge. I hope in time this beautiful country will become famous for other, more positive things, but for now it still seems to underpin everything that happens here.

I need to learn about that terrible period in the history of this country (and the world), so as a start I visited the Tuol Sleng genocide museum at the infamous ‘S.21’ building in central Phnom Penh. Not surprisingly, it’s intensely thought-provoking, but pretty grim.

· During the ‘killing fields’ regime of Pol Pot (1975-1978), the school was used as a prison camp, for detaining, torchuring and killing inmates

· S.21 (Security office 21) was reserved for the educated or those who posed a ‘special threat’ - basically anyone the regime didn’t like, including increasing numbers of Khmer Rouge activists themselves towards the end of the regime

· There are chillingly detailed records about the 13,000+ people killed in S21; only 7 inmates ever survived

· S21 is basically an ordinary school, built around two sides of an incongruously pleasant lawn with blossoming trees.

· There are rooms of seemingly-endless portrait photographs of inmates. The images are haunting: most look impassive, some even seeming to half-smile, whereas I’d assumed they would look scared or even defiant - I wondered if they had any idea what was going to happen to them

· Classroom after classroom had been transformed into torture chambers – big rooms with just a single iron bed in the middle, often with various gruesome implements still in place

· There were also pictures of bodies taken by the liberating Vietnamese army, still strapped to the beds with great pools of blood below. The photos were graphic, but the stark sight of the bed and implements was almost worse, leaving me to imagine the horrible details

· The prison rules seem to give an insight into the mindset of the captors – ones which stick in the mind are “Do nothing, sit still and wait for my orders” and “If you disobey you shall get either ten lashes or five shocks of electric discharge”. Oh and “When getting lashes or electrocution you must not cry at all”

· The same nagging question as I asked in Rwanda: how can this have happened in such a beautiful, friendly, peaceful country?

· Is it pedantic to ask whether this was actually, strictly-speaking, ‘genocide’ (there’s a long definition, but it’s basically trying to wipe out a race, hence the ‘gene’ root – was this actually the case here? Even if not, does that make it less bad?

· And a final, scary question: it happened here, so how can we be sure it won’t happen anywhere else? 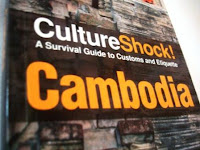 The most fun – and the most risky – part of running off to somewhere completely foreign has to be the colourful clash of cultures: the completely normal, unthought-about things I’m going to do which suddenly become rude or downright dangerous in the context of this strange land.

Now I’m no expert on Cambodia after a week or two, but I’ve already come across a few classics.
Is it good or bad, for example, to ask someone on the street where they are going? (good of course); to beckon with the palm up or down? (down you imbecile!).

And how would you know that traffic lights – and even the direction of roundabouts – are ‘merely suggestions’. Ignoring them doesn't seem to be a serious traffic offense, nor is driving at night without lights or even when drunk - but woe betide you if you commit the heinous crime of using front lights during the daytime. How are you meant to work that one out?

More intuitive to me is the pleasing notion here that the body flows from its most holy at the head to its most base at the feet. But would you have realised this means that it's seriously poor form to give a child a kindly pat on the head, and a major faux pas to reveal the soles of your feet to a monk?

My greatest worry so far is that it is impolite – not to mention seriously suggestive – to look a Cambodian woman in the eye. I suspect it’s more subtle that that, perhaps the delicate distinction between timely eye-lowering rather than a marginally overextended gaze, but the potential consequences of getting it wrong sure scare the monkeys out of me.

Such schoolboy errors could land a chap in serious hot water, not to mention a wedding band. Not that marrige ceremonies aren't great repositories for a country’s traditions - I’d love to see some here.

It could cost me though. For starters I’d need to get a new outfit, which would naturally be in anything but white (not for fear of clashing with the bride you’ll understand, but to avoid dressing in their colour of mourning). And then there’s the cash - to be returned to the happy couple in the invitation envelope. Whether or not I choose to attend. Now there’s a potential minefield.

And I haven’t even started to learn the language yet, so who knows what will be lost in translation? Though by my loose choice of metaphor at the end of the last paragraph I need to learn to select my words a little more carefully from now on.
Posted by Oly Shipp at 8:21 AM No comments: 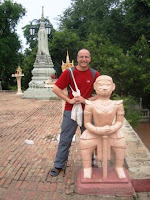 dden and unsignalled turnaround of which even Phnom Penn tuktuks would be proud, I’m now the most popular member of the party. Bad news is it came at a cost.

I am sharing a bedroom above the head office, which I now discover is the infamous ‘room A4’, usually reserved for volunteers who get sick. Conformist as ever, I now have a nasty chesty coughy cold thing.

Luckily the volunteers are a great bunch, drawn from a diverse range of countries – and all were touchingly attentive in their support for their new invalid.

The UK view was to drink water and take paracetamol, the Dutch to apply lashings of Vic-type paste. The Indians advised avoidance of phlegm-inducing bananas and any citrus fruits – plus a sneaky cigarette - as the recommended route to recovery.

Our Kenyan contingent suggested hot drinks and unspecified herbs may help. Unfortunately I didn’t get to consult the Philippinos. Aussies prescribe beer.

But I’m here to learn from my Cambodian hosts, so on today’s cycle-taxi tour of Phnom Penn I visited the big temple at Phnom Wat, and took care to splash myself liberally with monk-approved holy water.

This make me damper than usual, but I figured it exempted me from the alternative local approach, which seems to involve degrees of self-harm – either scratching my chest repeatedly with a coin, or 'cupping' the rim of a heated glass onto my back, burning the skin and producing a strong vacuum. This would probably work of course - the pain and discomfort would no doubt distract me from whinging about a mere runny nose.

So much choice – so much attention! But losing face is a big deal here so I couldn't favour one approach over another. 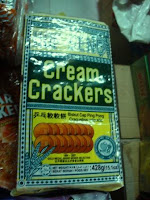 ambodia and I’m already the most unpopular member of the party - I slept all the way and completely avoided jetlag, most irritating for the other volunteers I’m sure.

If you don’t mind, an early intervention from pedant’s corner: the first ‘P’ in Phnom Penh is pronounced (apparently). So none of that knowing ‘nom pen’ nonsense please!

First impressions then? Well the immediate thing that hit me was the heat - the humidity really knocked me back. VSO staff kindly welcomed us with much-needed water, even though it was the temperature of an average cuppa!

Heavily loaded with 2 years of possessions each for a score of volunteers, we made our way to the VSO office. We drove on the right (French colonial heritage – more on that later), which contrasted from our short stop-over in Thailand.

Contrary to expectations the roads don’t seem particularly crazy. I guess some proper pavements wouldn’t go amiss, and crossing requires both assertiveness and slalom skills. There are loads of motorbikes of course, often laden with doors or dogs or extended family members (4 at a time is my best spot to date, but there’s time!), but actually driven much more slowly than say in London. Apparently it’s seriously bad karma to get angry - maybe Buddah has the answer to road rage?

Most of all Phnom Penh is seriously challenging my senses – already the sights of beautiful gold-topped temples contrasted with the beggers and glue-sniffers at the gate, the rotting rubbish nearly spoiled the delicious aroma of my street-cooked veggies and rice breakfast, and the sounds of traditional chanting soon gave way to lip-synking trannies on the bar at the Blue Chilli Club (sorry, no photos this time!).

So there’s blog entry number 1. I’m tired, a little culture-shocked, but feel really privileged to be here. I’m very keen to crack on with Khmer lessons next week, and really excited about my new life – wish me luck, and I might just keep on blogging...