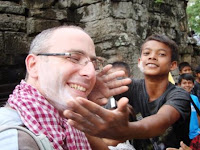 This is the most important week of the year in Cambodia - the start of the khmer new year. So Happy New Year! Good luck for you!

Being Cambodia, this occasion calls for a few days holiday. Preceded of course by some time to prepare. And followed by at least a week to recover.

Just in case you don’t take the hint, next week there are also official holidays for Labour Day and then Royal Ploughing Day. The point, I take it, is that the country pretty much shuts down this month - April is for festival, not work.

Unable to beat them, I decided to stay in my village and join in the celebrations.

Whilst I tried to go into the whole thing with an open mind, I feared it wouldn’t be long before the dreaded super-woofer speakers appeared. What I didn’t bargain on was that the party would be directly under my room – or that it would go on for two days solid. Fortunately (for me, maybe not her) Katja came to spend the week and was on hand to soothe my frayed nerves. And in fairness there was much to enjoy.

On New Year’s Eve we had a lovely wander around Thmar Pouk village. It was really good to see things through new eyes. The same place I might dismiss as a coarse, unsophisticated, dusty and featureless backwater was to her to a charming, simple, green and fascinating microcosm of Cambodian life. And looking at the photographs of our stroll in the soft, late-afternoon sunlight, I have to confess that her description seems much more accurate than mine.

A lie-in on New Year’s Day was out of the question – the thumping beats put paid to that, as did our neighbour’s decision to slaughter their pig (too cruel anytime, but the terrified pig’s cries were horribly human-sounding). So we decided to brave the heat and follow the line of tractors down to the village pagoda. It was a good old celebration, with fun and games enjoyed by all, and young and old dressed up in their special outfits. Black jeans / jackets, cowboy hats and shades, or bright yellow or red tartan shirts are clearly all the rage here just now. I may need to review my wardrobe.

A notice at the front of the wat instructed revellers to refrain from drinking, gambling or throwing powder or water. Just behind the notice was a row of beer stands, and beside was an area reserved for playing dice. Children as well as adults were active in the gaming, though many also ran up to the main wat building to chuck talc at each other. For those who actually wanted to do something within the rules there was praying for the pious and music (to a slow, swaying dance) for the masses.

The kids were having a great time, hurling water-bombs at each other and smearing talcum powder on faces, whilst the older ones drank beer and gently gyrated. When your most important festival is in temperatures of over forty degrees, focusing activities on cooling water / powder or iced beer / minimum activity dancing actually makes a lot of sense.

I also suspect that, as with festivals everywhere, the celebrations were an opportunity to break out of the usual social restrictions – throwing water was a good excuse for boys to chase after their squealing beauty of choice, powder was liberally rubbed onto faces in a country where such contact is usually taboo, and girls were allowed to get drunk when normally this would be seriously frowned upon.

To get some peace and quiet, we decided the next day to visit the pre-Ankorian temples of Banteay Chmar and Banteay Top, just a few kilometres moto ride from the village. Much smaller than Angkor, sadly they were also far more damaged during and after the Khmer Rouge era. However, it was still humbling in its sophistication and artistry, given that it dates back over 800 years. Restoration work is underway, but is at an early stage, and there are still many examples of the power of nature as trees encompass and eventually demolish even the great stone boulders.

Banteay Chmar was great, though it turned out not to be such an inspired getaway spot – usually practically deserted, it was the centre of local festivities and a hotbed of powder smearing – but we took it in good spirits, and the kids were delighted to be able to daub the barraing westerners whilst having a good grope of our funny white skin. The smaller temple site at nearby Banteay Top was, in contrast, almost deserted, and allowed for some quiet reflection of the glories of the ancient Khmer civilisation without some of the more recent, arguably less civilised interferences.