Why I hate Khmer food 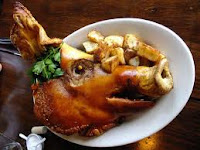 The delicate art of flavouring has been replaced by monosodium glutamate and piles of sugar. The proud tradition of tasty vegetarian food as been ditched for a headlong dash to eat as many gross animal parts as possible.

The food lacks both the flair and taste of Thai dishes and the innovation and variety of Vietnamese cuisine.

It may not be their fault – the Khmer Rouge killed off knowledge and culture and the cuisine was no exception – but the sad fact is the food here is not only frequently dirty and laced with chemicals, it is also just bland and boring.

10. ‘Special’ Eggs: Why settle for a perfectly good boiled egg when you can include a semi-formed chicken faetus?

9. Fried Spiders: Or maybe they’re tarantulas. Not that that makes it in the least bit better.

7. Cake: They look the part, with artistic and colourful decorations. Unfortunately they taste like cardboard and sour cheese.

5. Angkor beer: “My beer, my country”. An unfortunate flag-bearer, this bland, mass-produced swill is hard to swallow and harder to forget given its bitter chemical aftertaste.

4. Fish sauce: This putrid concoction can spoil the tastiest of veggie stir-fries, and without specific interdiction will pollute most dishes when eating out.

3. Dog-hair bread: The bread itself a poor, sweetened mockery of delicious French baguettes. So why not ruin it completely by adding a layer of dog hair (some claim it is shredded pork – same difference).

2. Durian: “Like eating raspberry blamonge - in a lavatory” according to Anthony Burgess. “A mixture of cheese, onions, sherry, rotting meat, and drains” suggests the BBC’s Christine Finn. Either way, you can see why many hotels and taxis don’t even let you carry let alone eat this gruesome fruit.

1. Cow intestines: A delicacy, ‘the best part of the cow’. Or, more accurately, a gross-out plate which looks like worms and smells like shit, which of course is uncomfortably near to the truth.